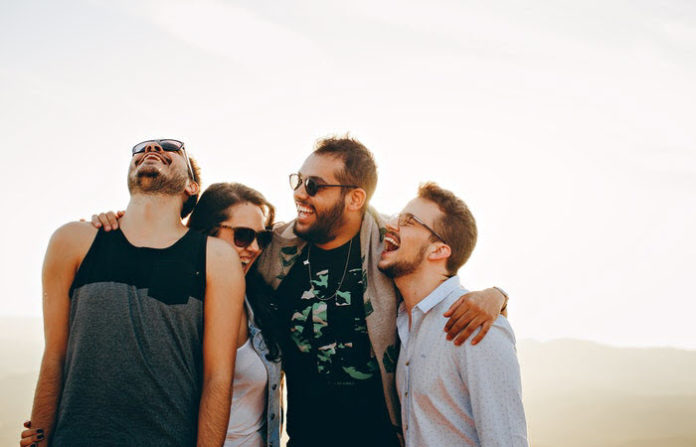 Spending 12 hours working in the hospital can easily tire you out. If you don’t know how to relax and unwind, you can end up feeling stressed out and unhappy with your work.

Now, before that happens, take a break and just unwind. We have the funniest nurse jokes to make you feel a little bit lighter.

Q: How do you know that a dead body found by the side of the road is a nurse?

A: Because its stomach is empty, its bladder is full, and its a$$ chewed! 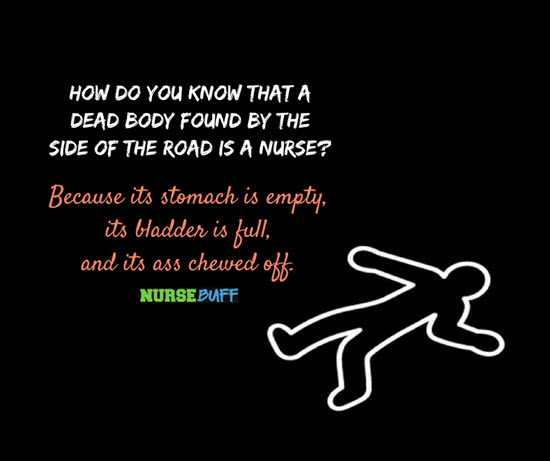 Three nurses died and went to heaven, where they were met at the Pearly Gates by St. Peter.

To the first, he asked, “What did you do on Earth and why should you go to heaven?” “I was a nurse in an inner city hospital,” she replied. “I worked to bring healing and peace to the poor suffering city children.” “Very noble,” said St. Peter. “You may enter.” And in through the gates she went.

To the next, he asked the same question: “So what did you do on Earth?” “I was a nurse at a missionary hospital in Africa,” she replied. “For many years, I worked with a skeleton crew of doctors and nurses who tried to reach out to as many peoples and tribes with a hand of healing and with a message of God’s love.” “How touching,” said St. Peter. “You too may enter.” And in she went.

He then came to the last nurse, to whom he asked, “So, what did you do back on Earth?” After some hesitation, she explained, “I was just a nurse at an HMO.” St. Peter pondered this for a moment, and then said, “Okay, you may enter also.”

“Whew!” said the nurse. “For a moment there, I thought you weren’t going to let me in.”

Q: How many nurses does it take to screw in a light bulb?

A: None. They just have a nursing student do it.

A nursing assistant, a floor nurse and a charge nurse from a small nursing home were taking a lunch break in the break room. In walks a lady dressed in silk scarves and wearing large polished-stone jewelry. “I am Gina the Great,” stated the lady. “I am so pleased with the way you have taken care of my aunt that I will now grant the next three wishes!” With a wave of her hand and a puff of smoke, the room was filled with flowers, fruit and bottles of drink, proving that she did have the power to grant wishes before any of the nurses could think otherwise.

The floor nurse went next. “I wish I were rich and retired, and spending my days in my own warm cabin at a ski resort with well-groomed men feeding me cocoa and doughnuts.” With a puff of smoke, she too was gone.

“Now, what is the last wish?” asked the lady.

The charge nurse said, “I want those two back on the floor at the end of the lunch break.”

Q: What’s It Called When A Hospital Runs Out Of Maternity Nurses?

A: A mid-wife crisis! 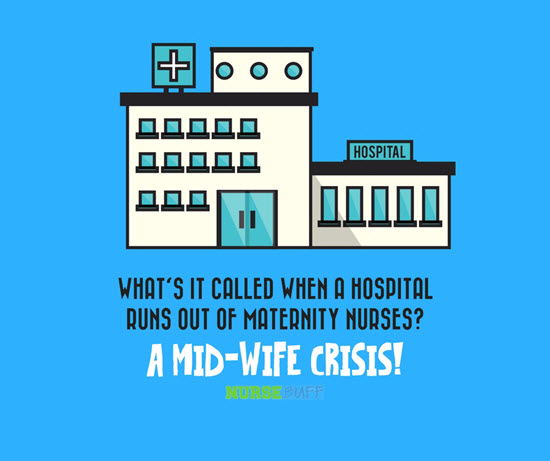 A skilled nurse died and arrived before St. Peter, who explained, “We have this little policy of allowing you to choose whether you want to spend eternity in heaven or in hell.” “How do I know which to choose?” She asked. “That’s easy,” said St. Peter. “you have to spend a day in each place before making a decision.”

With that, he put the nurse on an elevator and sent her down to hell. The elevator doors opened and the nurse found herself in a sunny garden, where many former friends and colleagues warmly greeted her. She had a great time all day laughing and talking about old times. That night, she had an excellent supper in a fantastic restaurant. She even met the devil, who turned out to be a pretty nice guy. Before she knew it, her day in hell was over and she returned to heaven.

The day in heaven was okay. She lounged around on clouds, sang, and played the harp. At the end of the day, St. Peter came and asked for her decision. “Well, heaven was great and all,” the nurse said, “but I had abetter time in hell. I know it sounds strange, but I choose hell.” With that, she got in the elevator and went back down.

When the doors opened, she saw a desolate wasteland covered in garbage and filth. Her friends, dressed in rags, were picking up garbage and putting it in sacks. When the devil walked over, she said to him, “I don’t understand. Yesterday, this place was beautiful. We had a delicious meal and a wonderful time laughing and talking.” The devil smiled and said, “Yesterday we were recruiting you. Today you’re staff.”

Q: Why do nurses bring red magic markers into work?

A: In case they have to draw blood. 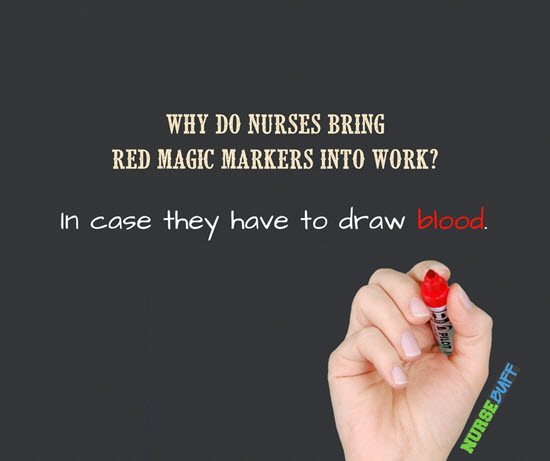 A Graduate Nurse throws up when the patient does.
An experienced nurse calls housekeeping when a patient throws up.

A Graduate Nurse wears so many pins on their name badge you can´t read it.
An experienced nurse doesn´t wear a name badge for liability reasons

A Graduate Nurse charts too much.
An experienced nurse doesn´t chart enough.

A Graduate Nurse keeps detailed notes on a pad.
An experienced nurse writes on the back of their hand, paper scraps, napkins, etc.

A Graduate Nurse will spend all day trying to reorient a patient.
An experienced nurse will chart the patient is disoriented and restrain them.

A Graduate Nurse can hear a beeping I-med at 50 yards.
An experienced nurse can´t hear any alarms at any distance.

A Graduate Nurse loves to hear abnormal heart and breath sounds.
An experienced nurse doesn´t want to know about them unless the patient is symptomatic.

A Graduate Nurse thinks people respect Nurses.
An experienced nurse knows everybody blames everything on the nurse.

A Graduate Nurse looks for blood on a bandage hoping they will get to change it.
An experienced nurse knows a little blood never hurt anybody.

A Graduate Nurse looks for a chance “to work with the family.”
An experienced nurse avoids the family.

A Graduate Nurse will spend days bladder training an incontinent patient.
An experienced nurse will insert a Foley catheter.

A Graduate Nurse always answers their phone.
An experienced nurse checks their caller ID before answering the phone.

A Graduate Nurse doesn´t find this funny.
An experienced nurse does.

The nurse who can smile when things go wrong…

Is probably going off duty. 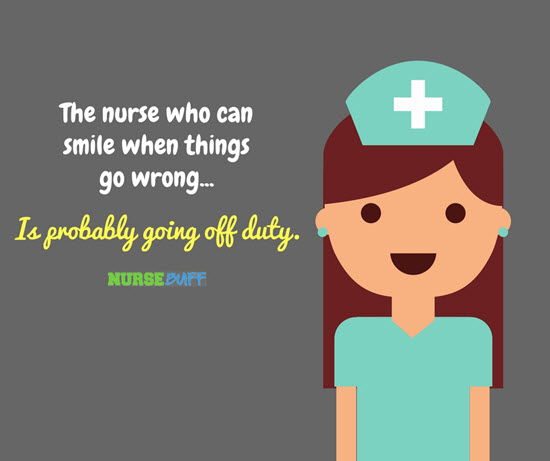 An old man, Mr. Wallace, was living in a nursing home. One day he appeared to be very sad and depressed.

Nurse Jane asked him if there was anything wrong, “Yes, Nurse Jane ,” said Mr. Wallace. “My Private Part died today, and I am very sad.”

Knowing her patients were a little forgetful and sometimes a little crazy, she replied, “Oh, I’m so sorry, Mr. Wallace. Please accept my condolences .”

The following day, Mr. Wallace was walking down the hall with his Private Part hanging out of his pajamas.

He met Nurse Jane. ‘Mr. Wallace,’ she said, “You shouldn’t be walking down the hall like that. Please put your Private Part back inside your pajamas.”

“But, Nurse Jane I can’t,” replied Mr. Wallace. “I told you yesterday that my Private Part died.”

“Yes,” said Nurse Jane, “you did tell me that, but why is it hanging out of your pajamas?”

Q: What did the nurse say when she found a rectal thermometer in her pocket? 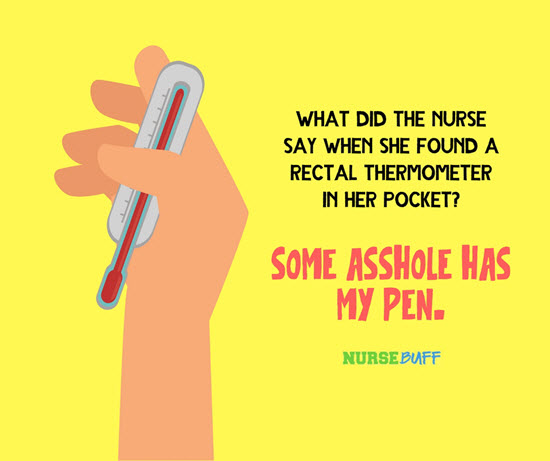 I went to casualty yesterday and said to the nurse, “I’ve been stung by a wasp, have you got anything for it?”

She asked, “Whereabouts is it?” 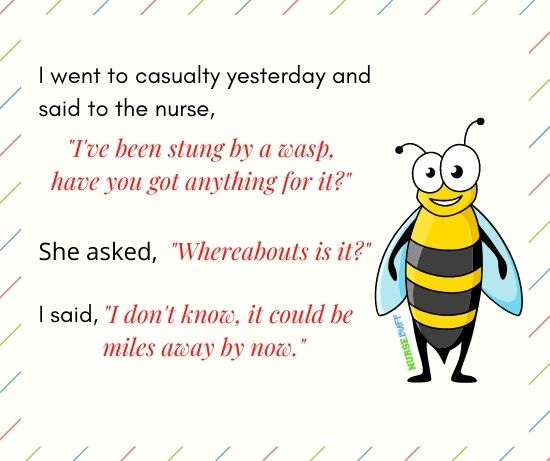 A nurse sees a guy wheeling himself frantically down the hall of the hospital so she stops him and asks what’s wrong.

He says, “I’m due to have an operation but I heard the nurse say, ‘It’s a very simple operation, don’t worry, I’m sure it will be all right.'”

The nurse says, “That’s okay, she was just trying to comfort you. What’s so frightening about that?”

The guy replies, “She was talking to the doctor!” 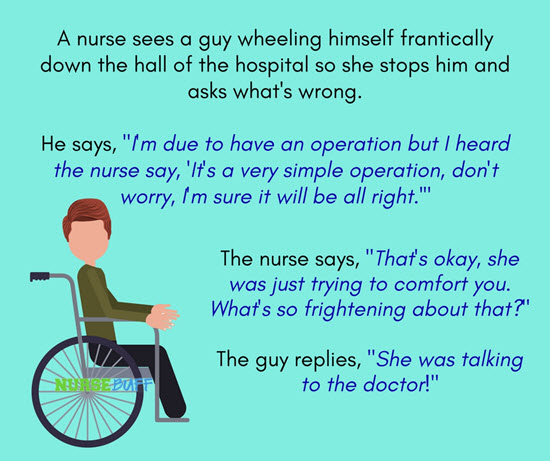 The nurse told the parents of a newly born child, “You have a cute baby.”

The smiling husband said, “I bet you say that to all new parents.”

“No,” she replied, “just to those whose babies really are good-looking.”

The husband again asked “So what do you say to the others?”

The nurse replied, “The baby looks just like you.”

When I went to get my vaccinations the young nurse told me she was very nervous as it was her first time.

I told her to give it her best shot. 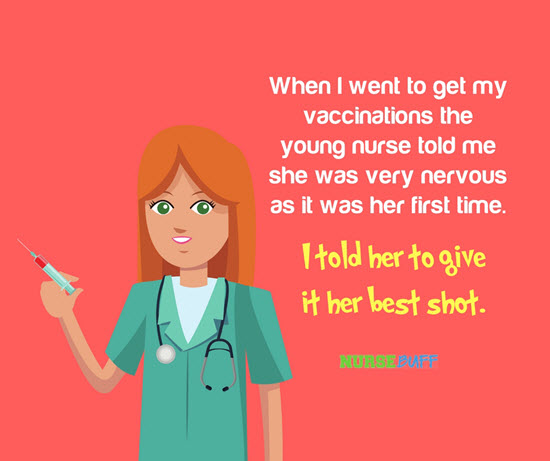 Q:  What Do Transplant Nurses Hate? 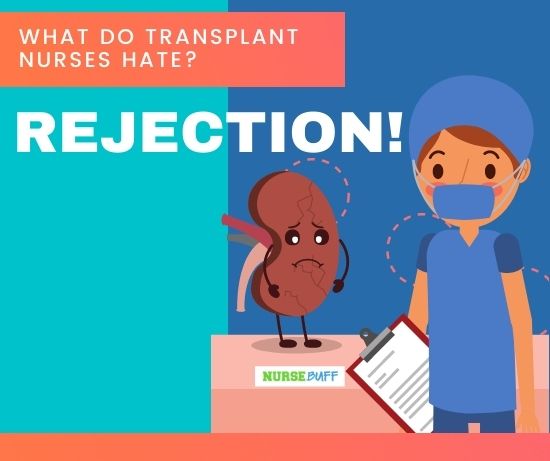 Did you hear about the nurse who died and went to hell?

It took her two weeks to realize that she wasn’t at work anymore! 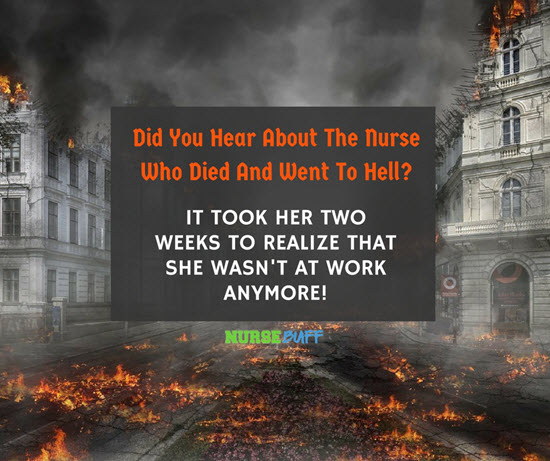 Q: What do you call two ITU nurses holding hands? 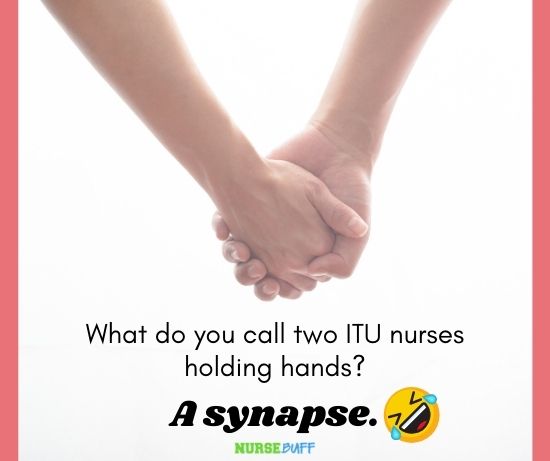 Q: What did the emu say to the nurse?

A: Mend her bones or walk the plank.

An old nurse is talking to her young colleague and says to her, “My new patient has the weirdest tattoo on his penis. It’s the word SWAN.”

The young nurse is intrigued and so she persuades the old nurse to swap patients with her so she can see the strange tattoo too.

Afterwards, the young nurse reports back to the old one, “You don’t read very well. The tattoo says SASKATOON SASKATCHEWAN.”

Q: How do you handle Metronidazole?
A: Carefully… because it’s Flagyl! 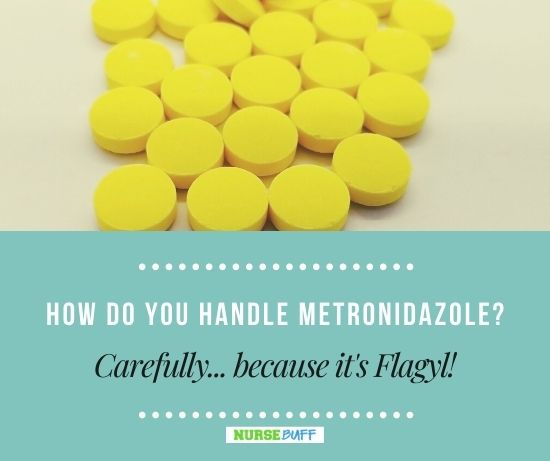 Doctor: How is the child who swallowed a few quarters doing?
Nurse: Well, no change. 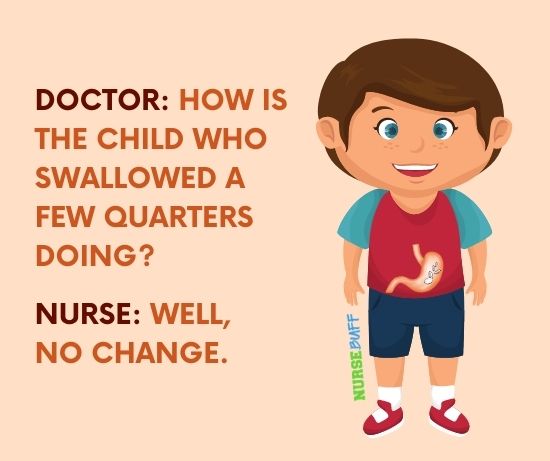 A motorcycle patrolman was rushed to the hospital with an inflamed appendix.
The doctors operated and advised him that all was well.
However, the patrolman kept feeling something pulling at the hairs on his chest.
Worried that it might be a second surgery the doctors hadn’t told him about, he finally got enough energy to pull his hospital gown down enough so he could look at what was making him so uncomfortable.
Taped firmly across his hairy chest were three wide strips of adhesive tape, the kind that doesn’t come off easily.
Written in large black letters was the sentence.
“Get well quick….. from the nurse you gave a ticket to last week.”

A family brings their elderly mother to a nursing home.
The nurses bathe her and set her in a chair at a window.
After a while, she slowly starts to lean over sideways in her chair.
Two attentive nurses immediately straighten her up.
Again, she starts to tilt to the other side.
The nurses rush back to put her upright.
This goes on all morning.
Later, the family arrives and asks, “Are they treating you all right?”
“It’s pretty nice,” the old woman replies. “Except they won’t let you fart.”

Do you have a favorite nurse joke? Feel free to share it below and let’s start spreading the fun!

15 Funny New Nurse Mistakes We Can All Learn From 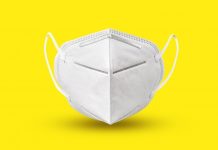 Nurses And Humor In The Time Of A Pandemic

Nurses and Doctors: To Flirt or Not To Flirt?

10 Anti-Cancer Foods You Should Always Eat

The 5 Best Nursing Schools in Houston

16 Ridiculously Funny ER Nurse Memes That Are Too Relatable